In late October I spent a week in Fiji for the Japanese Embassy and the Japan Foundation to present a lecture and workshop at the School of Arts, Language and Media of the University of the South Pacific and introduce films at an Anime festival. It was all part of Japan Culture Week 2011 in Suva, the capital city on the largest of the 300 islands and it seemed a bit like an act of cultural colonisation, raising the Anime flag and flying its colours on Treasure Island, creating a little Anime paradise in the Pacific Ocean. 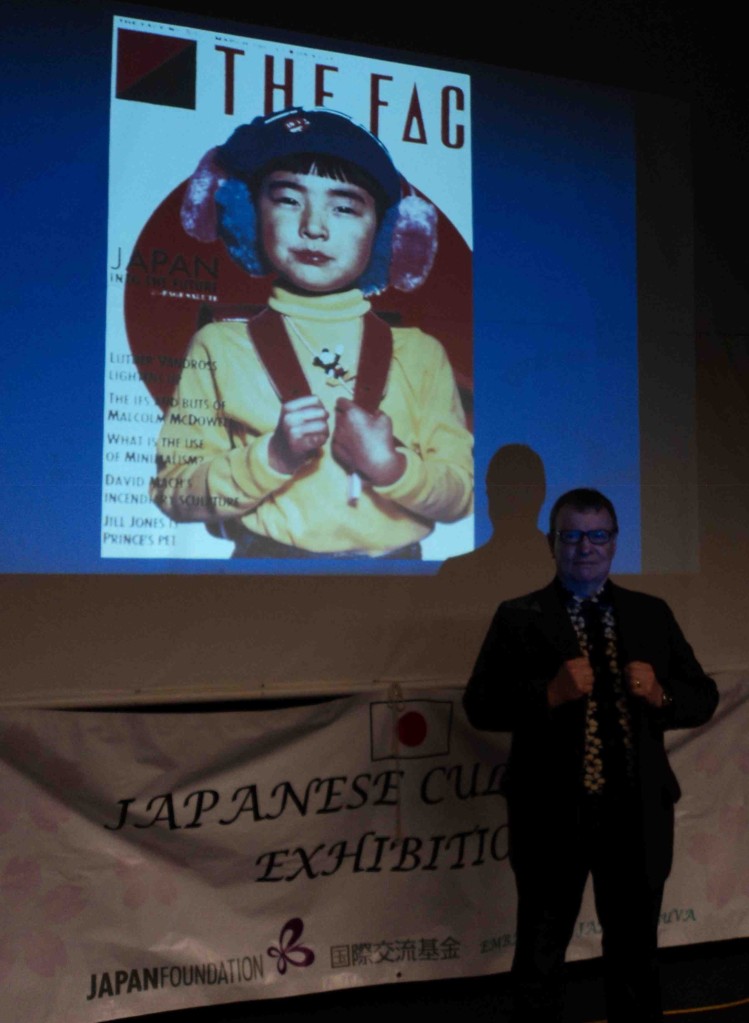 Lecturing on the global spread of Japanese pop culture in the 1980s. (Photo by Louise Graber)

My lecture Up In The Air: Anime’s Journey To The Stars described the global success of Japanese animation and its rise to prominance in the film world and in popular culture. It covered the work of Osamu Tezuka and the success of his work abroad. It also referred to Rintaro’s involvement with him as an animation director on Astro Boy prior to his subsequent productions that included his Tezuka homage film Metropolis, his adaption of Leiji Matsumoto’s manga Galaxy Express 999, and of Sanpei Shirato’s manga The Dagger of Kamui. Describing Shirato’s beginnings as a kamishibai artist before moving to manga and the alternative publication GARO the lecture was situated in the context of anecdotes from my time as a lecturer at an Arts college and a School of Design in Sydney where I observed the growing interest of students in Japanese popular culture. They became fascinated with manga, Anime, cosplay, J-Pop, scanlations, computer games, cameras, turntables, TV game shows, food and fashion, not to mention the learning of the Japanese language and the odd visit to Tokyo. The lecture concluded with an analysis of the productions and rise to prominence of Hayao Miyazaki and Studio Ghibli who, like Tezuka, found an international audience and critical acclaim. 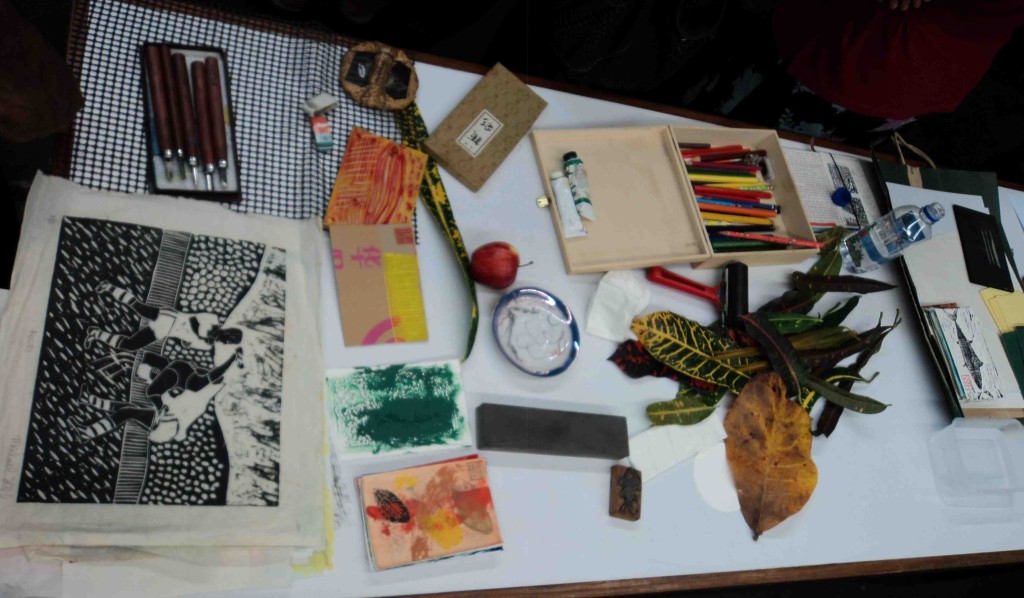 The tools and materials for the printmaking workshop. (Photo by Louise Graber)

In addition to the theory lecture I also presented a practical workshop demonstrating the printmaking technique I have developed as part of my artistic practice. Based on the Japanese creative print movement of Sosaku Hanga and the work of Koshiro Onchi and Shiko Munakata  in particular I showed examples of my work that have been made following this approach and methodology and applied to prints, postcards, T-shirts and comics. 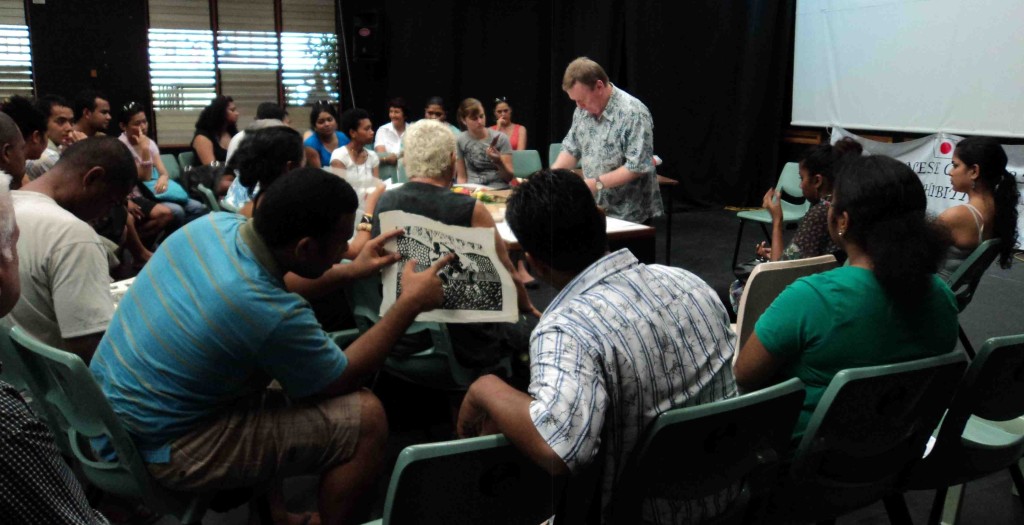 Teaching techniques to students of University of the South Pacific. (Photo by Louise Graber)

After the demonstration the students then made their own prints. By chance, the cultural activities took place in the same week as the Rugby World Cup finals and the only paint colours to hand were those of the Wallabies, yellow and green. My own rugby woodblock print (on the table and being passed around the class, in the photos above) provided some amusement and interest. 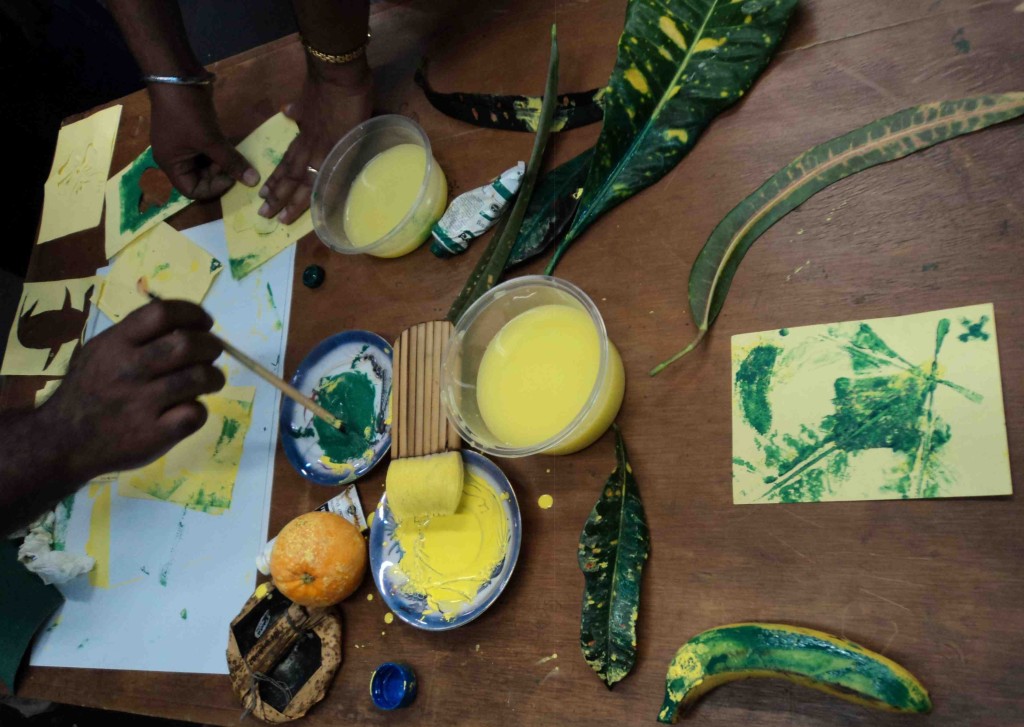 On the roof of the Village Cinema complex Batman and Spiderman look down intrigued at the sight of people going in to see the Ninja super hero Kamui. It was here that the Anime Film Festival was held each evening. The films Galaxy Express 999, The Dagger of Kamui, Laputa: Castle in the Sky and The Girl Who Leapt Through Time were screened to impressed audiences. Anime is now a fixed part of the Japanese cultural coat of arms, emblamatic of the country’s long history of graphic arts that feeds into and nurtures both Anime and manga. A week long festival of Anime films and supporting contextual cultural events signaled an alternative offering to Hollywood and the further spread of Japanese popular culture in the South Pacific. 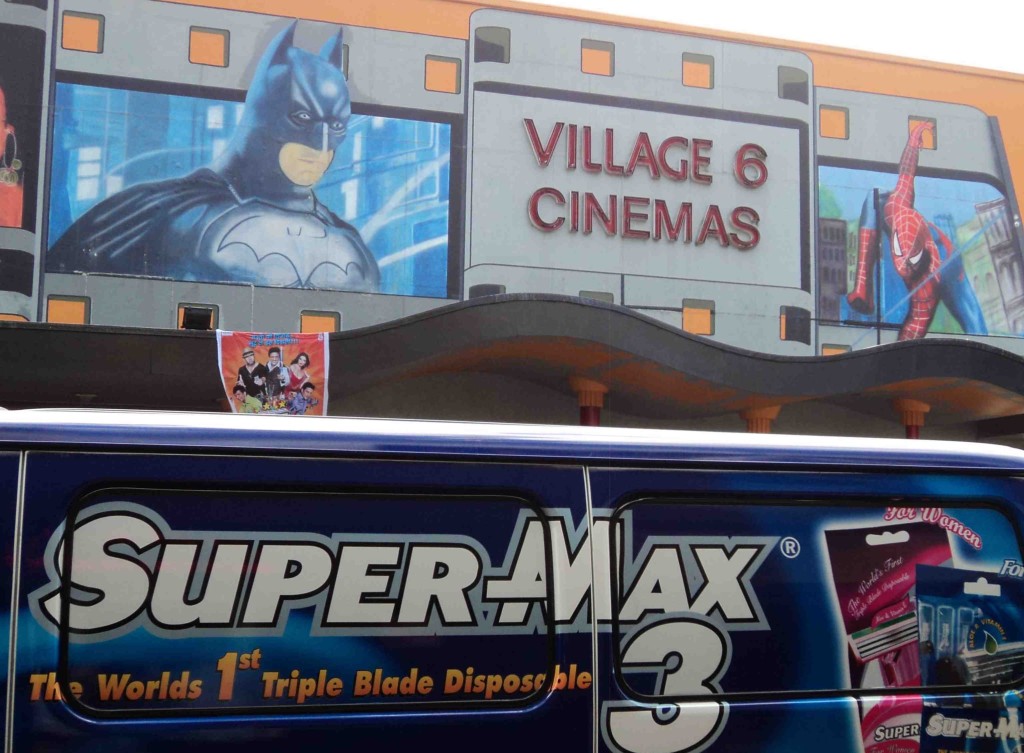 Some other visual moments from my Fiji trip follow: 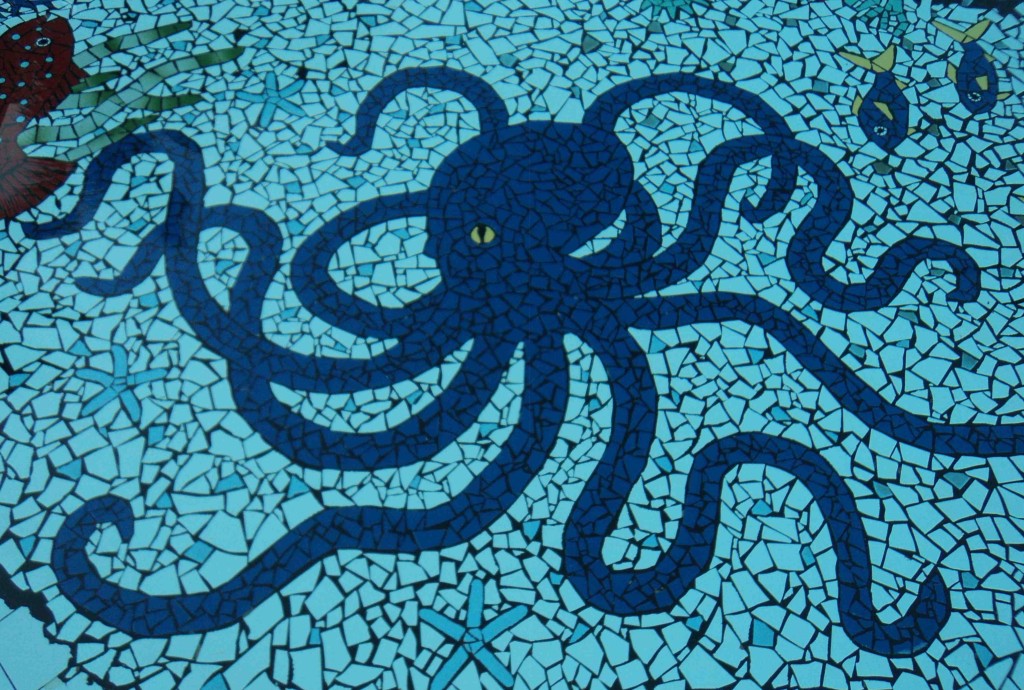 In the hotel pool in Nadi, my friend the octopus. (Photo by Louise Graber) 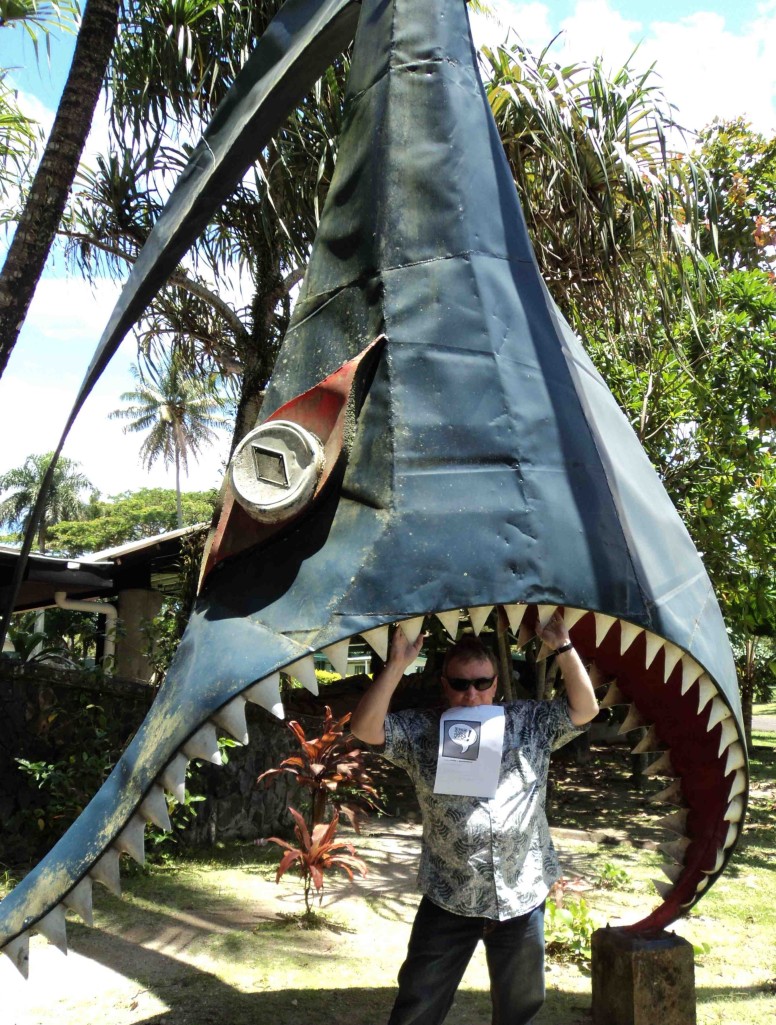 Doctor Comics in shark jaws at the University of the South Pacific. (Photo by Louise Graber) 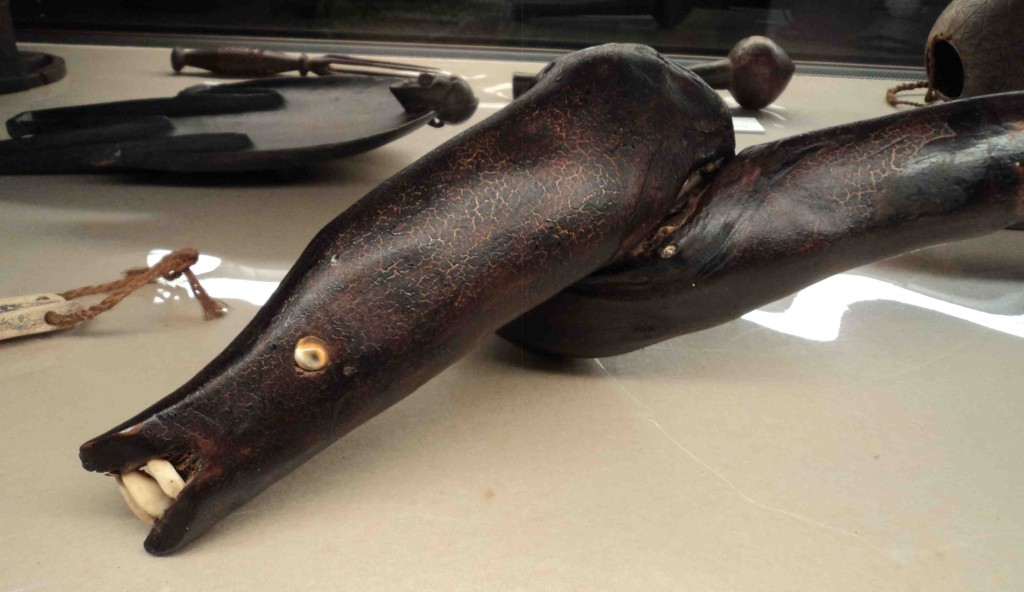 In the Fiji Museum in Suva, the Eel God sacred club. (Photo by Louise Graber)

In addition to my affinity with the octopus and various fish I am partial to the eel. During my Fiji visit I was pleased to find that the eel has acquired the status of a deity and a creative one at that in Melanesian mythology. Below is an artwork I created based on the freshwater eels that used to be found and fished in the Parramatta River near Blacktown in Sydney. 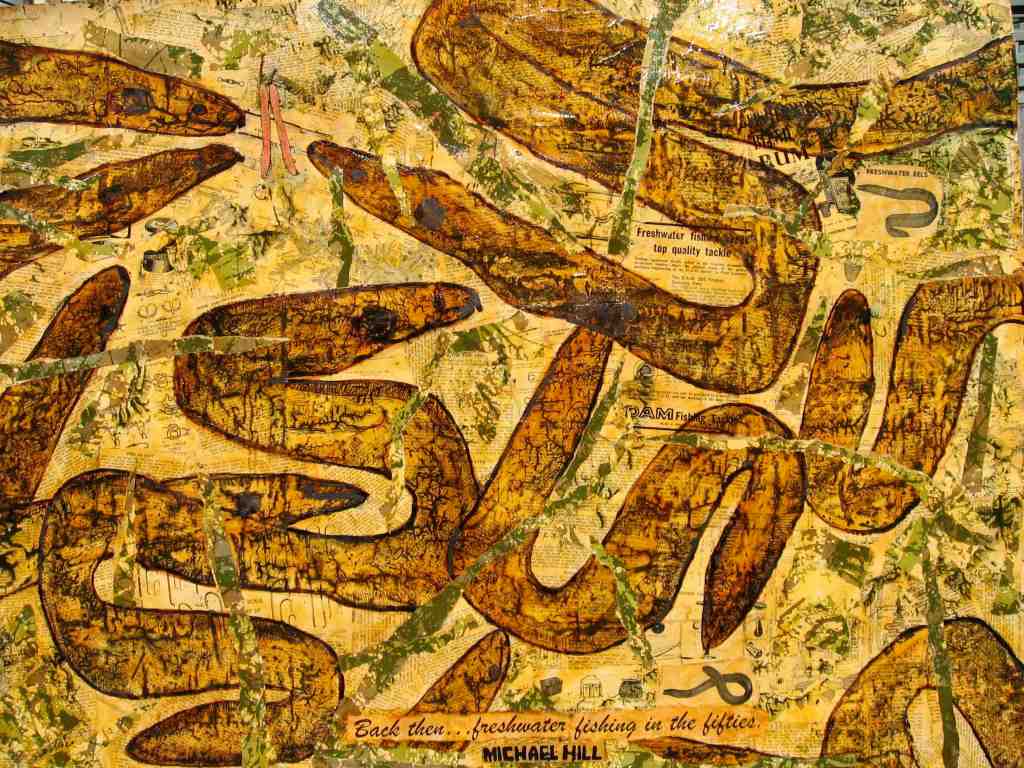 My own eel art work(print, painting and collage-© 2009 Michael Hill).

Another treasure inside the Fiji Museum was this old metal Hopkinson & Cope printing press, imported from England in earlier days. At my printmaking workshop in Suva I demonstrated a Japanese method that employs one’s body weight as a press rather than a device such as this European device. 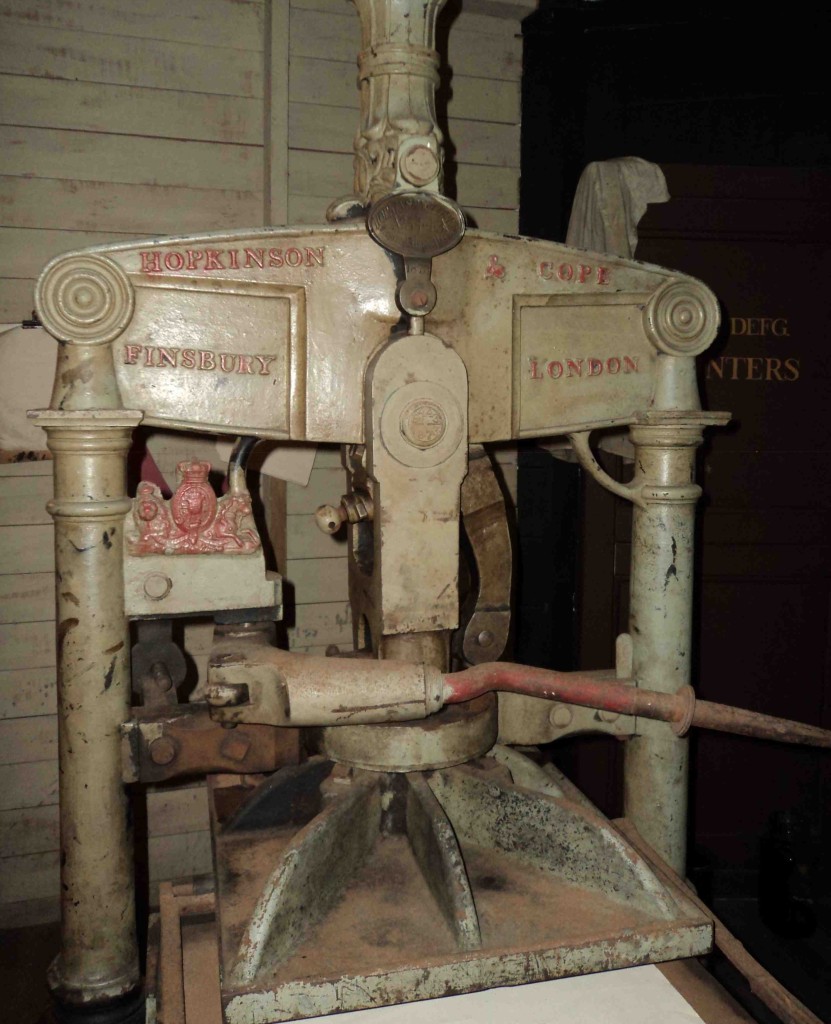 On this Treasure Island, apart from the art and the marine life, there were collections of coconuts, palm trees and flowers including red hibiscus and white frangipani, all over the place. 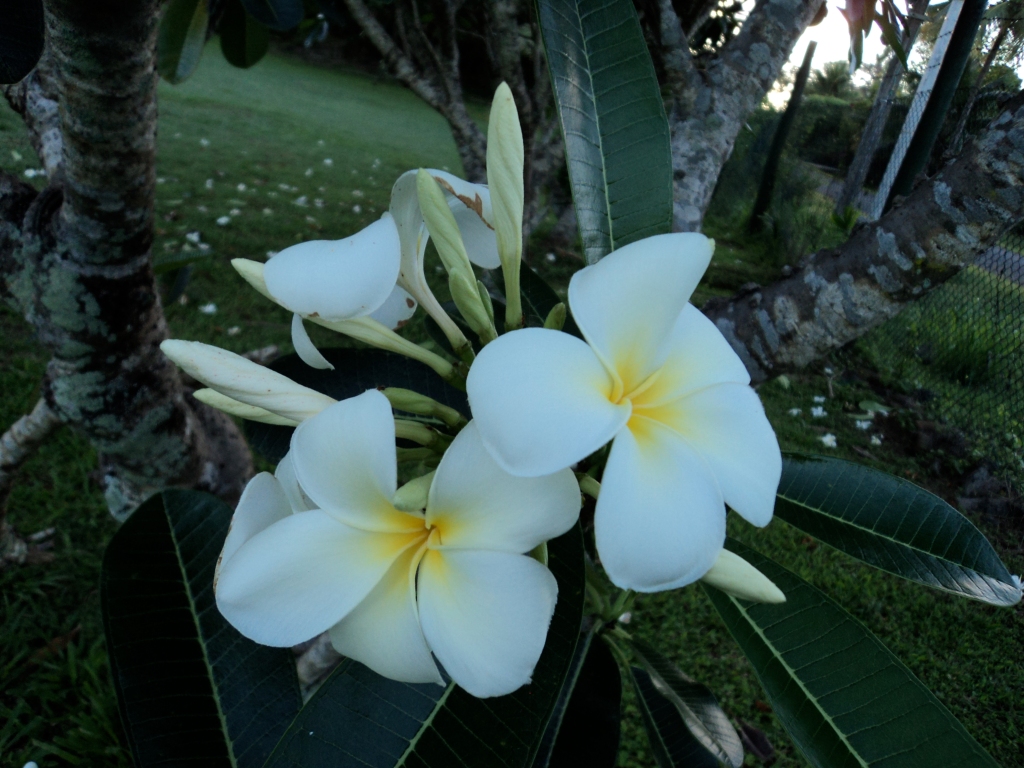 Big frangipani presence on the island. (Photo by Louise Graber)

Many thanks to Sayuri Tokuman and Susan Yamaguchi of the Japanese Studies & Intellectual Exchange Department and Tokiko Kiyota, Director of the Japan Foundation in Sydney, and to Nobuko Iwatani, Mako Nakauchi and Mele of the Embassy of Japan in Fiji, and His Excellency Yutaka Yoshizawa, Ambassador of Japan, for their ideas, assistance and support with this project.