Prior to the emergence of one of the larger comics and entertainment media conventions in Australia Supanova Pop Culture Expo the same management team, led by Daniel Zachariou, staged an event called Comic-Fest. This had a largely comics oriented focus compared with the subsequent broader span of Supanova in which comics represents just one of several entertainment media that included films, Television series, toys, trading cards, computer games and the internet. There were two stagings in 2001, at Fox Studios in February then followed in September by Comi-Fest 2 at the Sydney Centrepont Convention Centre. 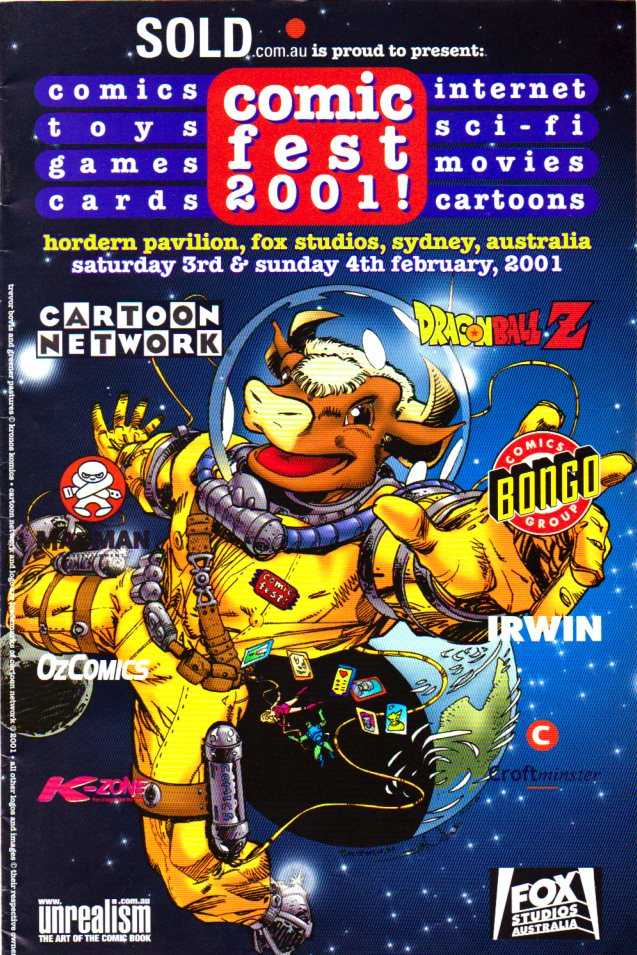 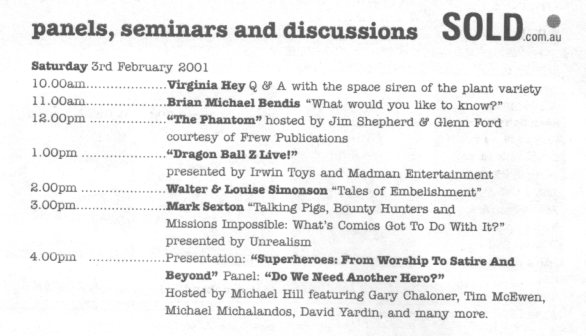 Saturday seminar details with my involvement in the superheroes panel.

For the September event with approval from the event director Daniel Zachariou I put together a panel discussion on Australian alternative comics by local creators Dillon Naylor, Daniel Gloag, Amber Carvan and Ben Hutchings who each talked about their own comics and answered questions I fired at them from the floor. A general discussion of the Australian comics scene followed.

Another shot of the panel, L to R, Gloag, Carvan and Hutchings.

Aside from the panel discussion the big attraction for the local small press was the opportunity afforded them to set up shop and trade their work on the commercial floor along with the imported comics. There was also the opportunity to meet fellow local creators and exchange comics, contact details and curry recipes. 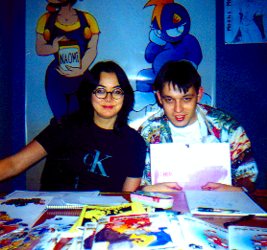 On the trading floor, Louise Graber and Alex Major. 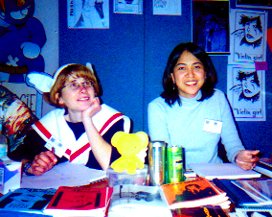 Along with the commercial trading there was the social attraction of meeting and chatting with fellow comics creators. 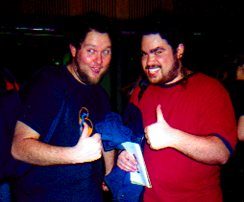 This is the fourteenth in a series of posts called Archives of Australian Comics History that document moments in the recent history of Australian comics, particularly alternative comics and the Australian Small Press. I started researching this subject in the late 1990s and it eventually led to my PhD thesis: Ph.D. Macquarie University, Division of Society, Culture, Media and Philosophy,  A Study Of Contemporary Australian Alternative Comics 1992-2000 With Particular Reference To The Work Of Naylor, Smith, Danko And Ord, 2003. On completion of the research I donated the materials and comics I had collected to the National Library of Australia: Michael Hill Collection of Australian Comics. Posts in Archives of Australian Comics History:   Comic-Fest   Comics  in Record Shops   Comics Workshops   Down Under Ground   Getting SMASH(ed)!   Imaginary Worlds Symposium    International Exhibition of Drawings   OZCON   Mind Rot   Savage Pencils   Sick Puppy Comix   TiNA Arena   MCA Zine Fair   2002 Sequential Art Studies Conference   2nd Sequential Art Studies Conference