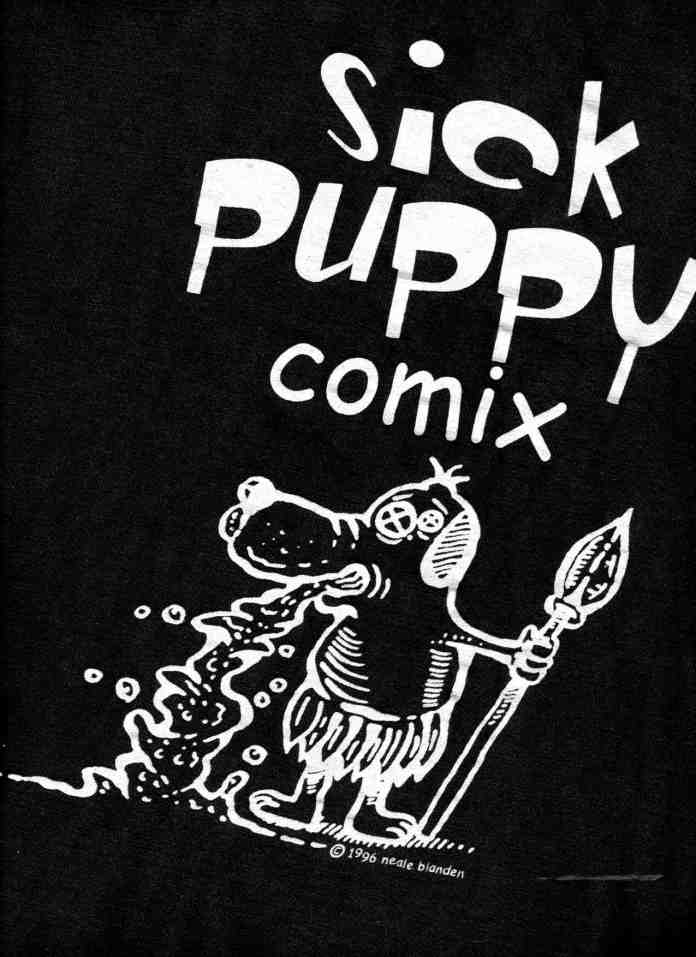 This blog was triggered by a T-shirt I happened to be wearing when I bumped into Stuart Stratu, the creator of Sick Puppy Comix, at the MCA Zine Fair. It’s about fifteen years old and still wearable and I love Neale Blanden’s design. Sick Puppy Comix was an anthology of short pieces by Australian and overseas creators that was edited and self-published by Stratu who was motivated to commence small press publishing after visiting a comics convention. Stuart Stratu: It was going to OZCON, one of the comics conventions and seeing the small press booth- that’s when I got the idea to make my own mini-comics. I had never done any comics or cartoons myself, just little drawings and things. So what I did was ran ad for contributors in the personals column of Drum Media. So all the people in the first issue, none of them had published their own comics at all. So that was basically how Sick Puppy No.1 came to be. That was April 96. Number two came out four months later. It was very primitive. A total of 13 issues have been published in a plurality of graphic styles from a range of alternative comics contributors whose content is both provocative and oppositional.

One common feature of the alternative comics scene was the practice of creators contributing to each other’s publications. Sick Puppy Comix utilised this practice which gave the comic a variety of graphic styles. By contrast there was a commonality of content with much of the material dealing with aspects of sex and/or violence, the X in the title denoting adult oriented and explicit content including scatalogical material. Whilst emphasising humour, it adopted an avant-garde attitude and encouraged its contributors to test both their own and their readers’ personal boundaries of taste and creativity. The print and presentation quality of the publication improved with each issue and this seemed to inspire creators to produce quality work e.g. Gerard Ashworth, Neale Blanden, Tim Danko, Anton Emdin, Michael Fikaris, Louise Graber, Maccad, Kieran Mangan, Chris Mikul, Mandy Ord, Pox Girls(Susan Butcher and Carol Wood), David Puckeridge, Q-Ray, SCAR(Steve Carter and Antoinette Rydyr), Glenn Smith, Ross Tesoriero and Ryan Vella as well as Stratu himself.

This post is from the series Archives of Australian Comics History research for my PhD at Macquarie University, Division of Society, Culture, Media and Philosophy, by virtue of the thesis A Study Of Contemporary Australian Alternative Comics 1992-2000 With Particular Reference To The Work Of Naylor, Smith, Danko And Ord, 2003. On completion I donated the comics collection to the National Library of Australia: Michael Hill Collection of Australian Comics. Posts in this series:  Comic-Fest   Comics  in Record Shops   Comics Workshops   Down Under Ground   Getting SMASH(ed)!   Imaginary Worlds Symposium    International Exhibition of Drawings   OZCON   Mind Rot   Savage Pencils   Sick Puppy Comix   TiNA Arena   MCA Zine Fair   2002 Sequential Art Studies Conference   2nd Sequential Art Studies Conference